Although it won’t add another three-and-a-half stars to my weekly score, one Audio Assignment we needed to complete this week was creating an audio bumper for our radio show. Considering our theme was “Wacky History,” a look into the bizarre origin stories of household products, I decided to take a slight “jab” at the original crackpot conspiracy theorist.

In the 1950s, ’60s and ’70s, Jeron Konig, better known as The Amazing Criswell, was a nationally-syndicated actor and writer; his main claim to fame was portraying a psychic, who made predictions so offensively wrong in retrospect, that he makes modern doom-sayers look like Robin Hood cosplayers. Nevertheless, he still managed to gain some modicum of fame from his attention-seeking ways back then, to the point that he had bit parts in not one, but two movies directed by Ed Wood. Not only was Criswell the de facto narrator in Plan 9 from Outer Space, he repeated this role in Night of the Ghouls, which wasn’t even given a home video release until a few years after his death. Not that bad, for the personal psychic of Mae West.

Suffice it to say, a show that aims to educate people about historical events, while also poking fun at things you wouldn’t believe existed “before your time,” would need to keep things tongue-in-cheek, so the audience could still laugh at the jokes, without any guilt to hold them back. Keeping that in mind, I decided my bumper for “Wacky History” would sum up our goals for this series, loud and clear.

Admittedly, it may sound like I’m insulting someone again at first, but the use of the “parrot voice,” on the second half of the tagline, shows that I’m in on the joke, and having as much fun with my role as Criswell did with his. For the background music, I believe that the opening seconds of “Walk Like an Egyptian” tells listeners that a different kind of school is in session, as “Wacky History” is all about bridging past with present, in a way that children of all ages can enjoy. Of course, those who want to get technical about my editing ability will be glad to know that an alternate take was published, as well, complete with last-second fade-out.

For further evidence, here’s some snapshots from the editing process for both versions, with the latter of the fade-out for the alternate cut. 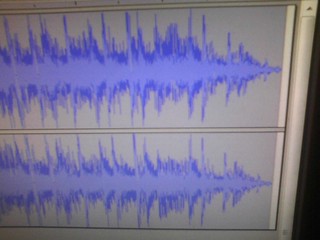 Now, to be fair, the entertainment industry of at least six decades ago had different standards, when you compare them to today’s equivalent. However, when audiences are told to “think of us as Criswell Predicts, only we actually know what we’re doing,” we want them to understand that we’re talking directly to them about these seemingly random subjects, and that we’re not better than they are, just because we have this knowledge; if anything, we’re professors at a glorified clown college. The takeaway from this task is that those who don’t know their history are doomed to repeat it, especially when it comes to those who aren’t as bright as they think they are. Rest in peace, Criswell.

As always, both “Egyptian” bumpers have been uploaded for listening, on SoundCloud.