Original Assignment
A Picture is Worth a Thousand Words, created by Stephanie Englman
They say a picture is worth a thousand words. Quite often we see pictures on different social media outlets. They are funny, awkward, or beautifully portrayed moments but we don’t know what led up to that point in time. Your task for this assignment is to find a picture and write a background or short story for it. It can be a photo you took yourself or found on the internet. This story could be based on a true event if the picture is from your personal collection, or completely made up if you are using a funny picture you found online. Be sure to tag it properly!

Remix Card: “Cancer Sucks”
You’d have to look long and hard to find someone who hasn’t been touched by cancer. Patients, survivors, family, friends, role models. For me, I’m pretty attached to my breasts, but I don’t want to die for them. Take an assignment and give it a cancer awareness message. Make it a general cancer sucks message or pick a specific cancer close to your heart and create a way to convince others to get screened, raise money, or simply support the cause. Save the ta-ta’s or save a life. Spread the word. 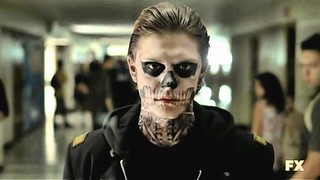 One of the key assignments for this particular grading period is how well we tell a story using a “remix.” In this case, I had to choose a photo from another person’s site regarding the original assignment, “A Picture is Worth a Thousand Words,” and try to promote a cancer awareness message with a story involving it. Unfortunately, I can’t really do that, given the seriousness that comes with the theme of this particular remix, especially one that hits as close to home as it does now. However, now seems to be the right time to try, because by the time this post goes to press, families across America will have celebrated all of the things they are thankful for in their lives, as part of the annual holiday tradition of Thanksgiving. With that in mind, I can safely say that I’m thankful for my grandmother, Alice, who survived her most recent cancer scare earlier this year.

This is actually the second time that my grandmother, who I’ve affectionately called “Grandma Fella” since I was young, has been sent to the hospital for cancer treatment in my lifetime, the first occurring around the time I started kindergarten. Either way, it still broke my heart to see another of my relatives end up bedridden, after losing one of my grandfathers, Isaac, to Alzheimer’s shortly after I turned thirteen, and my other grandmother, Hazel, to natural causes in February of 2014.

The truth is, I know what the madman in the brown coat meant when he said that he didn’t want to go. I know what the nameless narrator meant when he prayed that his wife wouldn’t have to go, and what the woman with the heart of the ocean meant when she told a homeless man that she wouldn’t let go. Alice, if you’re reading this, I just wanted you to know, right now, that I will never let go.

This is to honor my wonderful grandparents, both those who have passed on and those that are still with us. The picture I sampled, of the character of Tate from the first season of American Horror Story prior to a high school shooting that he was a part of, is from a previous assignment by Brittany Raze entitled “The Noble War.” The picture may be taken out of context from the episode it was spliced from, but the fact of the matter still stands: Be it in realms of fiction, or the greatest story ever told – that of real life, as it occurs – nobody likes death. They hate it now, they hated it back then, and honestly, I thank the doctors for keeping health care debates out of the emergency room.