Today’s prompt comes from James Popsys. Who? “After shooting photos of places and things, James uses photo-manipulation to create imaginative scenes that show strange sights that you never see in the real world.”

Can you remix a very boring photo in a creative ways? Take one of your personal photos and make an imaginative scene that does not exist in the real world using some photo editing.

When I first saw the directions for this Daily Create task, I was reminded of a holiday special that actually aired on Cartoon Network, of all channels, called The Christmas Dinosaur. It’s a long story, but suffice it to say, it’s essentially what happens when PorchLight Entertainment attempts to cash in on the success of Steven Spielberg’s magnum opus, E.T. the Extra-Terrestrial, without the McDonald’s sponsorship that led to another E.T. cash-in, Mac and Me, actually getting a theatrical release.

Keeping this in mind, the photo I decided to remix for this challenge was one of the exterior of my house, during last winter’s record snowfalls, when global warming wasn’t nearly a threat as it is now. As for how to remix it, I chose a random public-domain sketch of a dinosaur, preferably from Bing Images, posted it within the boundaries of the photo, cleaned everything up, and size the dinosaur for the illusion to take full effect. Once I was satisfied with everything, I saved the project as is, closed down Photoshop for now, retrieved the finished project on my computer and posted it onto both my Flickr and Twitter accounts. 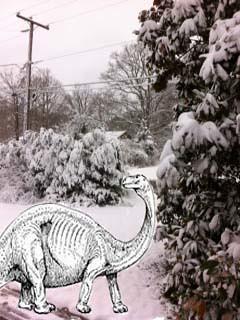