A “Rapid” Response, If You Will

Today’s Daily Create challenge was to make a photo celebrating the 45th anniversary of the release of Simon & Garfunkel’s “Bridge over Troubled Water.” In a case of “second verse, same as the first,” my edits were limited, as I basically typed up the words “TROUBLED WATER” onto a picture of a random bridge. I even took the time to edit the font and color, to ensure the illusion remained intact, even if the end result is more literal than previous affairs. This is probably because I tried to create a rebus puzzle of sorts, much like the ones from game shows like Classic Concentration and Catch Phrase. The end result may be mixed, but when you only have twenty-four hours to make everything work, checking for errors isn’t always going to appear on the proverbial check list. Either way, the photo’s now available for viewing on Flickr and Twitter. 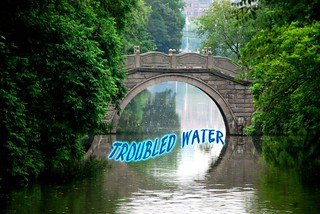 POSTHUMOUS EDIT: I actually created a second version, that fit the bill better, and published it onto Flickr hours ahead of schedule, but countless computer issues while editing another project of mine forced me to upload it to the Daily Create’s Twitter feed twelve minutes after midnight. The minor edit I made involved a more cracked-up, darker version of the word, “TROUBLE,” floating in the stream; this edit provides a better fit for the day’s theme, while keeping the original illusions, and allusions, intact. 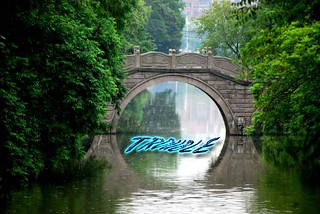