Why Don’t We Do It In The Road?

Take/Find a picture of a couple who are obviously in love. Use the picture to tell a story. Give the story some background and maybe even create a dialogue between the two or tell the story from each point of view. Just give it some detail and create a background to your photo! It can be a true story or a completely made up one, just have fun with it! 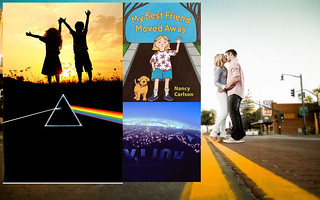 They were childhood friends one minute, and high-school sweethearts the next. The one thing they both had in common was that they never confessed their love to each other, out of fear that the other would fail to reciprocate it. Every one of their former classmates saw the writing on the wall, and were even willing to gamble away their hard-earned allowance money, just so they could say they knew exactly when the two became a legitimate couple. Then, he turned eighteen, and he moved away to a new town to start his college education, without so much as a minute to say goodbye to friends and family, let alone her. Suffice it to say, she wasn’t the only one with a broken heart on that day.

It would take years for the lonely lady to get her bearings straight after the announcement that he was leaving her. As part of her lengthy recovery, she moved to Los Angeles to work at a record store, painting album covers for the local acts, performing on the Sunset Strip. She had settled down for a single life under the California sun, but one afternoon, after she put down her brush, and washed her hands of her daily demolition, a familiar face caught her eye, right across the street from her.

Her one-time friend, none the worse for wear after years on campus, had also moved to Los Angeles to settle down, after graduating as a valedictorian in his class. He was supposed to find a job soon, given how little money he had left, but he knew the importance of “first things first;” keeping this in mind, he tried to find himself, so he knew what he was getting into, in this new location of his. He was going to a local record store, to see if he could find a part-time there, or, at least, some music to listen to as he continued to unpack at his new apartment, after his lengthy tour of Beverly Hills; instead, he came across a familiar face, right across the street from him.

When their eyes met, it was like he never left: The same clothes they wore the day he went away still fit them even now, and the scene playing out between them felt like something out of a paperback novel…after the traffic had cleared, of course. The two started walking towards each other, meeting in the middle of the road, near the two yellow lines that kept many a car from crashing into each other. This time, though, it was not to be, as the two finally, albeit silently, confessed their love for one another, with a kiss on the lips, as rush hour drew to a close. The two were grateful to see that they were both okay, long after he had to leave her, and officially restarted their relationship, right where it left off.

After I found the necessary photographs on Bing Images, I created the story you’ve just read, in its entirety, by myself, making sure to base it around the central photo. Once I finished that, a quick round of edits on Photoshop was all it would take to finish the job, ensuring the intended effects were provided. As soon as I uploaded everything onto the site, the project was complete.

For the Love of Money

My first of three Visual Assignments this week is to provide a “digital facelift” to a one-dollar bill, based on a gallery dedicated to drawing on money. This particular challenge, as well as the two to follow, were all worth three-and-a-half stars at the time of their selection, making my weekly total ten-and-a-half stars.

For the sake of brevity, I basically went with the type of graffiti you normally see on money, including the stereotypical French mustache and beret; the opening lyrics to an infamous folk song; declarations of love; a bouquet of flowers; and two nods to classic pop culture references, namely “Kilroy was here,” a popular catchphrase associated with graffiti dating back to the days of World War II, and “Show me the money,” the line that won Cuba Gooding, Jr., his Best Supporting Actor Oscar in 1996. It took me eight layers of editing, including the original dollar, for this to work; once I did, though, I was one quick upload to Flickr away from completing my first assignment of the week.

Our third and final Visual Assignment for the week is also the one all of my classmates had to undertake, as we took a simple household object, and tried to see it in a new way. Naturally, I decided to go with a tomato, since it was the only thing I could find on such short notice. As for how I made all of these images, it’s simple: Use the tomato to start with, and then let my imagination, and the junk drawer, go wild. For these pictures, I started with the “Tomato Captain,” which set the theme for pirates and the ocean. I added gadgets to the tomato, to represent different things, took pictures, and took them into Photoshop. Then, I changed the hue, the saturation, added layers, and kicked it up a notch. As always, I uploaded all the finished products onto my Flickr account, thus completing the assignment in full.

Admittely, I’m not a fan of the 1994 movie, Forrest Gump, for too many reasons to list here. One flaw I can list, though, is because the message it tries to convey – life is about the journey, not the destination – has found itself lost in translation over the years; even the original book’s author warned readers, “Don’t never let nobody make a movie of your life’s story,” on the first page of his sequel novel, Gump & Co.

So, my second Visual Assignment for the week just had to be inspired by this piece of historical fiction, as we had to insert ourselves into a historical picture. Since one scene in the movie involves the titular idiot savant, played by Tom Hanks, inspiring John Lennon to write his signature solo song, “Imagine,” during a talk show appearance, I decided to turn the clock back a bit further, and put my face on a color photo of the band that first gave Mr. Lennon the global acclaim he has to this day: the Beatles. 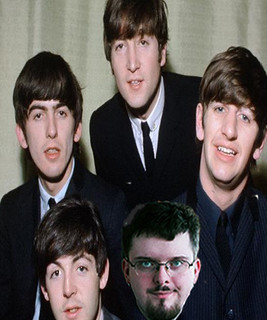 This was as straightforward a task as you can find, as after finding an available picture of John, Paul, George and Ringo on Bing Images, I cropped part of the self-portrait I’ve used since the start of this class onto the photo using Photoshop, uploading the finished product onto Flickr once all was said and done.

Talk About a Space Case!

My first ds106 assignment of the semester, “Say It Like the Peanut Butter,” was described as follows:

Make an animated gif from your favorite/least favorite movie capturing the essence of a key scene. Make sure the movement is minimal but essential.

As a child, one of my favorite films was the 1996 comedy, Space Jam, starring Michael Jordan and the Looney Tunes cast. A send-up of ’90s sports movie clichés, this movie provided an alternate history of MJ’s first retirement from the NBA, following his father’s passing. According to the film, it wasn’t until “his Royal Airness” came to help Bugs Bunny and company win a basketball game of their own that Jordan was inspired to return to the court for good, and only two years after he left.

The gif I created sums up this movie’s zaniness in one fell swoop, with the ultimate exaggeration of Jordan’s notorious free-throw line dunk. The website, imgflip, was used for its construction, via its Animated GIF Maker. Once the necessary edits were made to the footage, directly uploaded from a YouTube video of the same scene in its entirety, the GIF was generated, and was claimed by me, once I signed up for an account on the site.

I understand why some comedians might have issues with the ethics of the Looney Tunes themselves, but when livelihoods are at stake, I guess you could say that this film ending any other way…would’ve been quite a stretch.