[REQ_ERR: COULDNT_RESOLVE_HOST] [KTrafficClient] Something is wrong. Enable debug mode to see the reason. In (Your) Dreams | Mitchell's Hot Topics

Create a design assignment that includes a least 3 things in the picture, and at least one of those things has to be inside another. The example, for instance, includes a black magnet and a microchip inside a small black box and these together were all put together and then added into the photo of old video games.

This was, oddly enough, the easiest Design Assignment I had this week, at two-and-a-half stars, with the irony being that, when I selected this, it was actually worth four stars. Nonetheless, I actually liked the movie, Inception, so much so that I actually waited until after I saw the film, in its entirety, before watching Doug Walker’s “Bum Review” of it. However, it wasn’t the only thing I liked for turning the standard concepts of science-fiction on their collective head. So, given that we’re basically playing Russian dolls with household objects, it didn’t take long to come up with a fitting design for the piece. 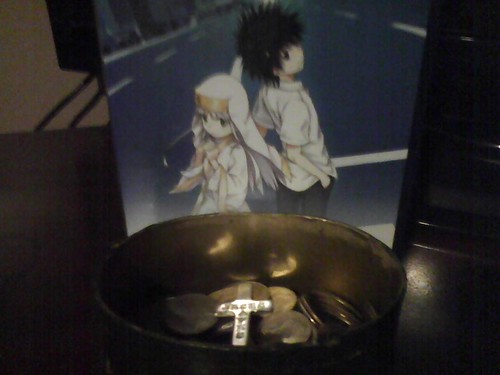 This one was done with a shot from my cameraphone, of my copy of the anime, To Aru Majutsu no Index, or A Certain Magical Index, on DVD and Blu-Ray, hovering over a container of various coins, with a silver cross pendant, reading, “Jesus saves,” across the sides, inside it. The first step towards making this photo work, was setting up the box set’s artwork, to serve as the backdrop, as I needed it to provide the illusion of two kids standing near a wishing well, represented by my next object of choice. 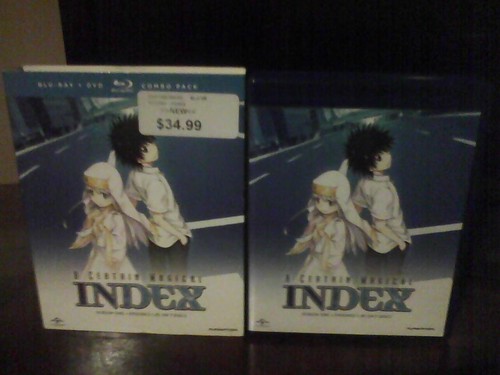 My coin collection, which makes up the false well, symbolizes the expensive life that one of the show’s central characters, Touma Kamijou – the spiky-haired high-school boy on the cover – lives at the start of the series. You see, this show takes place in a world where supernatural abilities are a reality, and schools are built for the sole purpose of teaching students to control these powers; while Touma is one of the weakest “espers” in one of these schools, in the town of Academy City, he does have a secret ability, “Imagine Breaker,” which can negate any opponent’s power during combat, at the cost of his own luck, hence the coins representing every time things took a turn for the worse for him in his life. 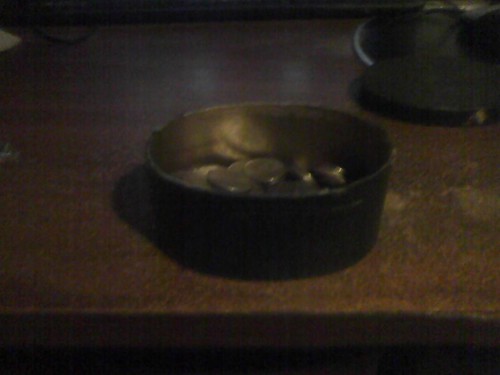 For my final step, I placed the aforementioned “Jesus saves” pendant inside the container of coins, in such a manner as to blend in, and stand out, simultaneously; this is to symbolize the female lead, and title character of the franchise, who is literally named Index Librorum Prohibitorum. She’s the one in the white and gold habit, which she calls the “Walking Church,” as she starts off as a member of the Church of England’s Necessarius branch – the Church of Necessary Evil – at the start of the show; while I may have joked about her name, the reasoning behind it isn’t something to laugh at, as she’s memorized 103,000 grimoires of magic by the time the series begins, so it’s safe to say she can hold her own in a fight. 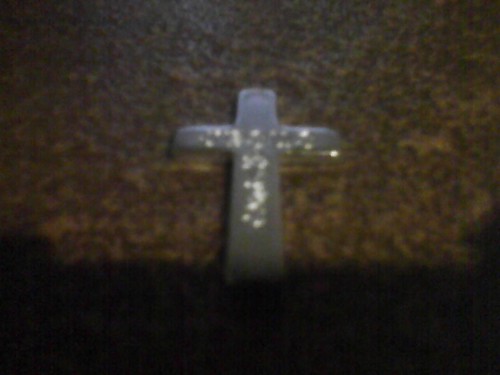 Thankfully, this photo session was easy for me, as the lighting put enough emphasis on the cross to draw people’s attention to it, while the grainy quality of the overall product keeps their interest, by getting them to think that this photo, taken hours before this entry was posted, may be older, and grungier, than it is. To me, I think this aesthetic works here, as it provides a feeling of dark mysticism between the box set, the coins, and the cross, which is fitting, considering what actually happens in the show. Note the lack of spoilers.

Sadly, this means I have one challenge left to complete, and with only eleven-and-a-half stars out of a possible twelve, it means I’m going to have to bring out the big guns to get me through this week. Wish me luck, ladies and gentlemen, for when next we meet, I will raise the dead.