[REQ_ERR: COULDNT_RESOLVE_HOST] [KTrafficClient] Something is wrong. Enable debug mode to see the reason. Pump(kin) It Up | Mitchell's Hot Topics

My sixth Daily Create task for this mid-term period could also double as the most bizarre one of the bunch. To be fair, I only had to deal with making a YouTube video, but still, after making one Halloween tribute with my last batch, you would think divine providence had sent me a year’s supply of sequel bait for that effort!

Nonetheless, my challenge this time was to celebrate the upcoming holiday with what was described on the site as, quote, “a haunting video starring a pumpkin.” Since you only have one day to make these things, I think the “haunting” part could be crossed off the list before my first take could be printed.

The step-by-step instructions are easy enough, if you ever plan on doing something that’s similar to this. After uploading the necessary imagery onto Windows Movie Maker, I edited them for time, in order to make sure that I got the best effects with what I was given. It also didn’t hurt that for the soundtrack, I created my own MP3 of Fall Out Boy’s “Uma Thurman” – a song I chose because of how much of it feels like a legitimate Halloween song, in its own right – using a conversion website, and uploaded it to play during the slideshow. From there, it was all about the transitions and effects, especially making it so that all of the photos I chose looked like they were black-and-white, regardless of how well they looked in color or not. Adding further emphasis to the old film motif was a snow-white medieval font I used for the opening text, as well as my name, class, subject title, and the name of the background song, near the end. 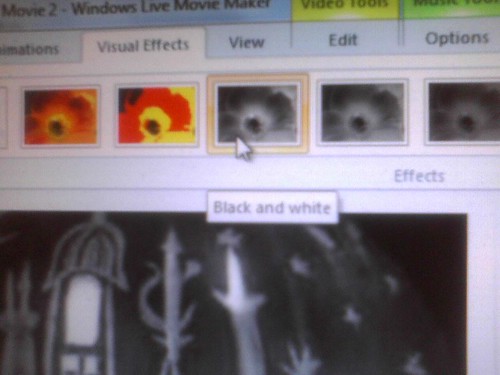 As for why I did all of this for my entry, I decided to take some artistic liberties with my video-making abilities. For one thing, the entire production was shown in black-and-white, in a nod to one of the biggest staples of modern Halloween merriment: the Universal monster movies. Also, while a majority of the images were in the public domain already – I picked them all up from Bing Images, as per the usual route – three of them were taken during a recent visit to my Grandma Fella’s house. For placement’s sake, the images in question were used to make the end-of-film “narration” by a smiling pumpkin model, as well as the closing credits “sequence,” wherein more medieval fonts were used for the occasion. Also, while the rest of them were right-side up, all three of my original photos were on their side, as a potential nod to the sideways nature of the holiday. It is, as I brought up in a previous post, all the fun of a circus, but without the big top to hold everything back. 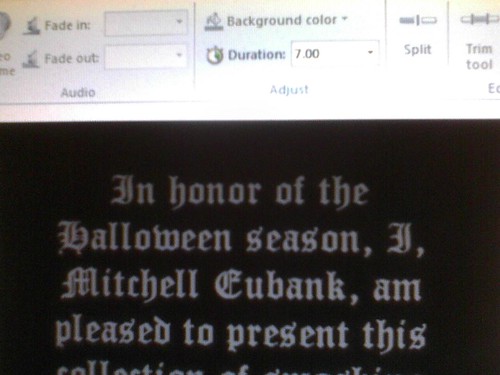 After everything was edited together, I saved the final product on both my computer’s server, as well as a separate file, which I then uploaded to my YouTube account. From there, I just sent everything over to the Daily Create’s Twitter feed, and wrapped everything up for the week.