[REQ_ERR: COULDNT_RESOLVE_HOST] [KTrafficClient] Something is wrong. Enable debug mode to see the reason. The Beaver Did It! | Mitchell's Hot Topics

The Beaver Did It!

Have you ever seen those crime shows that organize a case using a suspect board? Like Scandal or Blacklist? Well, that’s exactly what this assignment is. You will create a suspect board (or a board that connects different characters) to show interaction between the people. Feel free to add text, objects, and locations that connect to the people/characters to develop the story even more. Make sure that the board clearly shows how the pieces are connected, and in your post, explain the story behind it. 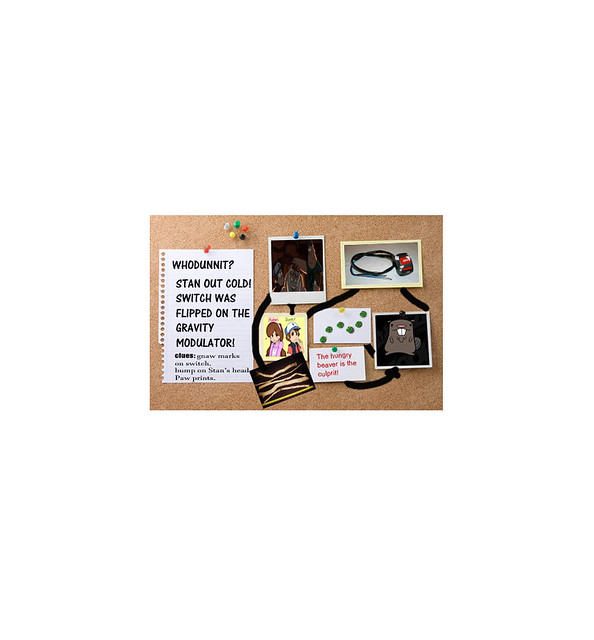 This was our mandatory assignment for the week, also worth three stars. Having never watched a single episode of Gravity Falls, and only really getting bits and pieces of what’s going on via hearsay, I decided to make my suspect board look like Stan Pines, the grandfather/uncle of Dipper and Mabel Pines, was knocked unconscious after the gravity manipulator was “accidentally” turned on, like it tends to do in the intro to the show.

There were paw marks on the ground – cue the artist rendering in lieu of actual beaver tracks – leading up to the switch that powers the manipulator, which would have gnaw marks on it. Suffice it to say, Dipper and Mabel would be the prime suspects, since they actually saw Stan get injured, were using his lucky fez to hide the wound until it could be properly cleaned, and would’ve noticed that the switch had been turned on, albeit temporarily, because some mechanical contraptions tend to stay warm for a while after they’re turned off.

Stan, however, would’ve noticed both the paw marks on the ground, as well as – cue the decisive clue that nobody else notices until the very last act of the piece – a series of sticks with bite marks on them, as if someone, or something, was whittling them down so they could use them to make a home for themselves. Yes, it seems one of the local beavers was the one to accidentally turn on the gravity manipulator; shut it off out of shock, thus causing the bump on Stan’s head in the first place; and all because it was the time of the year for beavers to build shelters from the bears, and other predators, of Gravity Falls.

This was not as quick of an editing job as I would’ve suspected, but I’m still satisfied with what I have, given all of the necessary pictures I needed to upload, to complete the needed effect of a suspect board. Once they fit into their respective squares, I connected the pictures together with the spray paint feature of Photoshop, in lieu of string, as a cost-cutting measure. After that, I saved everything on my computer, and finally uploaded the finished file onto Flickr; this gives me a new score of nine stars, out of a possible twelve, and with two challenges left.