Another assignment is completed, and another three-and-a-half stars are wasted, as I just finished editing my potential commercial for my upcoming mid-term podcast, “Wacky History.” In this advertisement, modeled after several segments from VH1’s “I Love” series of yearly retrospectives, I do my best impersonation of Donald Trump, briefly talking about the origins of Graham Crackers, penicillin, and potato chips.

For those who came in late, the facts I hinted at were all featured in an article on businesspundit.com, and, yes, they are all true.

The music I chose to play in the background was Nektar’s instrumental cover of the O’Jays hit, “For the Love of Money,” which reality TV fans instantly identify as the theme song to The Apprentice, a show originally hosted, in a sense, by Trump, himself. 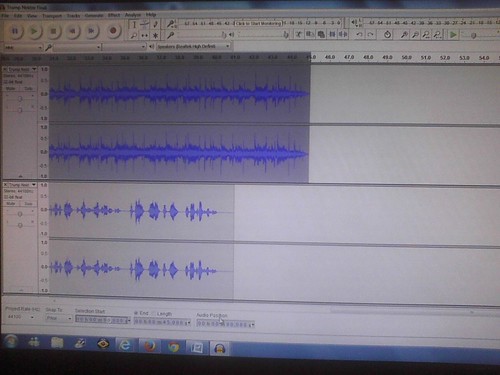 Once I got everything spliced together, it was, more or less, smooth sailing, right on down to uploading the finished product onto my SoundCloud account.