[REQ_ERR: COULDNT_RESOLVE_HOST] [KTrafficClient] Something is wrong. Enable debug mode to see the reason. To Tell the Truth | Mitchell's Hot Topics

To Tell the Truth

While I’ve already completed my six Daily Create assignments for the week, I decided to throw in a seventh, for show. Keeping that in mind, today’s task was to “create an audio file that tells us how you will change the world today. Creating a song is optional but possible!” Using my best “dramatic monologue” voice, I made my response as swift, and as close to home, as humanly possible.

Also, before you ask, I did, in fact, do all of this in one take, making sure that the intended effect was delivered in full. To make a long story short, I recorded all of this using the Sound Recorder on my laptop; saved it onto a flash drive; transferred it from my laptop to my main computer; uploaded the saved file; edited it using Audacity; saved and exported the newly-edited file; and uploaded everything onto SoundCloud. As for my choice, I think it’s probably something that all of us, who ever so much as considered playing God with the lives of others, might need to consider doing in their lifetimes, because making peace with our pasts won’t fix the damages done in our flirtations with artificial divinity. 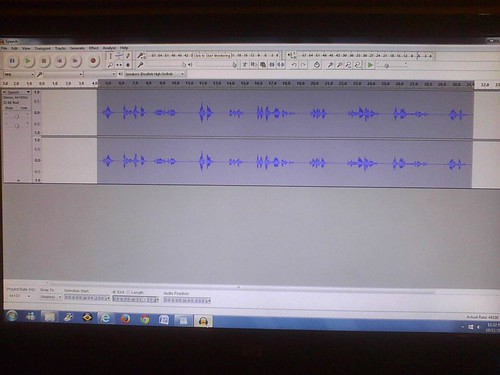 There were very few edits made to the audio file, which, in retrospect, does sound like Maya Angelou’s speech from Bill Clinton’s first inauguration back in 1993. Either way, I managed to get my entry completed, and submitted, minutes before the midnight deadline, over on my SoundCloud account.