Don’t get me wrong: I had plenty of options going into my first of two Audio Assignments, in which I had to deliberately botch a popular song lyric. For example, I originally planned to do, “It doesn’t make a difference if we’re naked or not,” a mondegreen associated with Bon Jovi’s “Livin’ on a Prayer,” primarily so I could joke about divine providence coming back to haunt me for what I did to the band’s logo, in conjunction with Europe’s recent Geico ad, and maybe find a way to drag Jermaine Stewart into the mix, because it just felt right. However, given the upswing in news stories involving the abuse of the Second Amendment – to the point that there are now two reports of genital-related shootings in as many weeks, if you look hard enough – I had to go with one that fits the theme, and somehow manages to make it even darker. Yes, ladies and gentlemen, the song I’ve opted to perform for you this week is none other than Pearl Jam’s ode to gun violence from 1991, “Jeremy.”

“Jeremy” was written in the wake of a high school shooting orchestrated by the aptly-named Jeremy Wade Delle, in Dallas, Texas – a city, and state, that apparently seems to value their hunting rifles, far more than the air they’re supposed to breathe, and the planet they’re supposed to live on. I mean, neglectful parents are one thing, but living in an environment where it’s every man, woman, and child for themselves, on top of that neglect, is a pretty scary concept for anyone to wrap their head around. Even their educational system glorifies survival of the sickest, and false lyrics like this aren’t going to help with matters any time soon.

It actually took a while for me to edit both the original track, which I lifted from the music video using a website that specializes in MP3 conversion, and my voice, which I created a second file with using the Sound Recorder feature on my laptop, with the Audacity feature on my main computer. It was about as confusing as that last sentence. 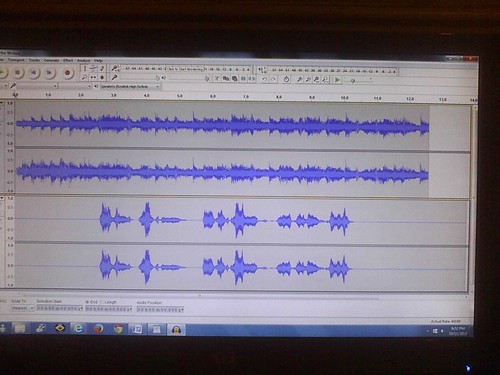 Once I did, though, everything clicked into place, and my finished product was uploaded onto SoundCloud, for three-and-a-half stars, out of five for these two weeks.